Mrs May’s ministerial sub-committee on Heathrow expansion,  which Philip Hammond our MP is a member, is expected to vote in favour of presenting the Revised National Policy Statement (Heathrow expansion) to Parliament.

Given the recent rail debacles that the Secretary of State for Transport Chris Grayling has presided over, with many from both sides of the House demanding that he should resign it is expected that in an attempt to diffuse the rail debacle bad news, Chris Grayling will present the Heathrow proposal to Parliament as early as today or some time during the week.

The proposal must be voted on in Parliament within 21 days of it being presented to Parliament.

Due to this limited time period and the difficulty for MP’s to comprehend the facts from fiction published by Heathrow, it is expected that the vote will go through in favour or a 3rd runway. – Heathrow’s PR campaign alone has cost more than £30 million, as acknowledged to the Transport Select Committee in February this year – with no less than four separate Advertising Standards Authority (ASA) complaints upheld in 1 year; in all four cases, the ASA concluded that the claims were misleading and could not be substantiated – plus the investment promises made by Heathrow to the regions (which incidentally are non-binding on Heathrow).

The environmental impact on Englefield Green and surrounding area cannot be overstated.

Adding an airport the size of Gatwick to Heathrow is not going to end well for Englefield Green and surrounding areas.

Currently, even according to the DfT’s own figures, Heathrow noise significantly affects more people than the the combined impact of 8 of the largest major airports in Europe (in noise order: Frankfurt, Paris Charles de Gaulle, Paris Orly, Brussels, Amsterdam, Madrid, Rome and Munich)! 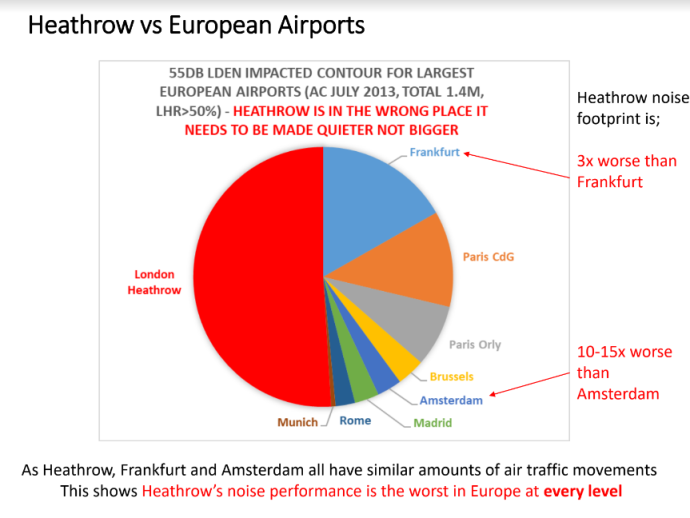 An expanded Heathrow with an additional 54% (260,000) increase in flights will significantly affect many more people, as identified by The Guardian newspaper who published information obtained by a Freedom Of Information (FOI) request that shows, from the Government’s own unpublished figures that 2.28 million people would receive more noise in 2060 and 490,000 people would receive a doubling of noise by 2030; when the 3rd runway opens in 2026 and according to the DfT becomes full in 2028, around 3 million people will receive more noise. Englefield Green will receive more than a doubling of flights from the new indicative flight paths and a doubling of noise along concentrated flight paths, trialled in 2014.

A fresh examination, by the New Economics Foundation in March 2018, of the economic case for a third, north west runway at London’s Heathrow airport finds it eroded to the point where it is no longer financially viable. Using the government’s own formula for assessing the value for money of transport schemes, Heathrow expansion along proposed lines would be rated as either ‘poor’ or ‘low’ value.

The Government’s own 2040 forecasts show that the NWR’s value over 60 years range from minus £2.2 billion to minus £7.7 billion. This loss will be paid for by the UK travelling public and taxpayers.

The Government’s Transport Select Committee report on 23rd March 2018, came out in favour of the 3rd runway (not unanimously – a significant minority were opposed), but with a considerable number of pre-conditions. The TSC warned the Government that unless they met those pre-conditions, outlined in the report, before the vote in Parliament, that they would run a significant risk of a Judicial Review.

A Judicial Review is expected to be placed in the High Court within six weeks of the Parliamentary vote, led by four Heathrow impacted Local Authorities – Wandsworth, Hillingdon, Richmond and Windsor and Maidenhead.

Runnymede Borough Council is opposed to Heathrow expansion on environmental grounds, but is yet to support the legal challenge.

Heathrow have stated that they will be asking for a 4th runway.

The 4th runway, as proposed by Heathrow, will be situated to the south of the airport in the Stanwell Moor area with a loss of 850 homes, stradling King George VI and Wraysbury reservoirs and the M25, it will be 2 miles from Englefield Green, allowing over 1 million flights/year from the 4 runways.

Our MP Philip Hammond supports Heathrow expansion, having previously opposed it at a public meeting in Englefield Green in 2014.

If you would like to express your views to our MP Philip Hammond for his representation of our local community, you can email him at philip.hammond.mp@parliament.uk