Have your say: DfT Consultations

The DfT is keen to hear your views on Heathrow expansion and airspace modernisation.  All submissions need to be received by 25 May 2017. It’s really important that we all make our views known.

EGAG volunteers have now distributed the 2 DfT Consultation Freepost leaflets on Airspace Modernisation and Heathrow Airport expansion to all properties in Englefield Green.

(please let us know if you have not received yours or would like additional Freepost leaflets, as it is on a per person basis, not household).

For the sake of the village’s future it is vital that people either:

Complete the Freepost Airspace Modernisation and Heathrow Expansion leaflets and post them by 22nd May or,

Fill in the DfT online forms by 25th May.

Please fill the consultation responses in – it’s important and affects us all as well as future generations.

An Overview of the Government’s 2 DfT Consultations:

The Airspace Modernisation will revolutionise airspace and the way commercial aircraft use that airspace by using GPS technology as per the 2014 flight trials.

One of the main drivers for this modernisation is to allow more aircraft to fly in the South East, specifically allowing Heathrow Expansion to go ahead.

In fact the head of NATS (National Air Traffic Services) CEO Martin Rolfe stated that Airspace Modernisation in itself would not be required if it weren’t for Heathrow Expansion.

You may have heard this week, that the Institute of Directors has stated that the next Government should build 2 additional runways in the South East to accommodate more aircraft activity; Heathrow’s 4th Runway, Gatwick’s 2nd Runway? Where will it end?

If you need any help with the consultations or have any other queries please contact us. 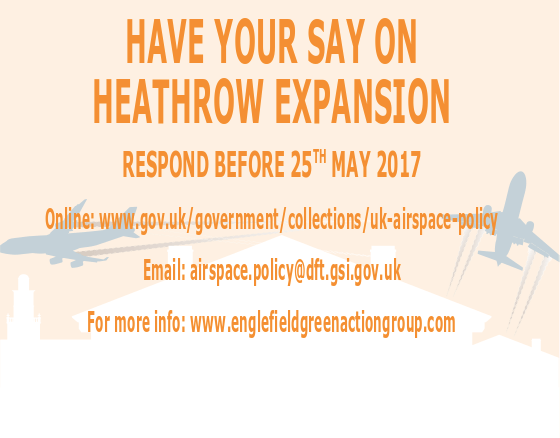 Why oppose a third runway?

Below you’ll find a list of suggested points for each consultation; you might like to cut and paste the points that most resonate with you (and add to your own submission) and send to the DfT via the links given here or complete the Freepost leaflets.

You can also view our draft responses for both consultations here and here.

Suggested points for the airports (Third Runway at Heathrow) consultation:

You can also view more detailed information on the flawed NPS here, courtesy of TAG. 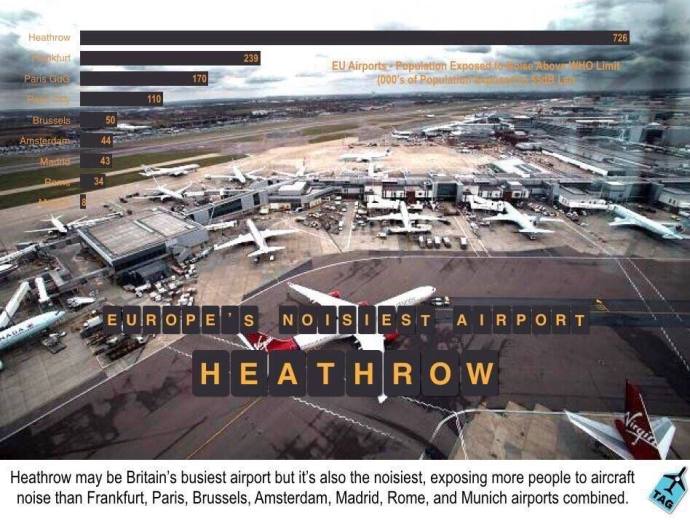 In its consultation materials, DfT has quoted a figure of £61 billion economic benefits over 60 years (down from the £147 billion published in the final Airports Commission report and the the figure that is still published on Heathrow’s website of £211 billion).  This £61 billion is totally misleading because it is a ‘gross’ economic benefit, that is benefits without the corresponding economic and financial costs being subtracted.  The proper basis for making a decision on an infrastructure project such as this is clearly set out by the government is NET economic benefit, where costs are subtracted from benefits.  Not cherry-picked gross benefit figures.  Infrastructure projects are routinely evaluated on this basis, using DfT’s own guidance, to give a ‘Net Present Value’ (NPV).

The £61bn is stated in the consultation leaflet as “expected economic benefits to passengers and the wider economy”. That figure is consistent with a figures derived from the DfT document ‘Further review and sensitivities report’ published Oct 2016 which can be seen here.  ES2 (page 9) of that report shows “total benefits” as £59.2 to £61.1bn.  But crucially, that benefit figure is before all the costs are subtracted.

The same table shows that after costs are subtracted there is a NET economic benefit of £0.2 to 6.1bn (expressed as “Net Present Value”).  That is, a figure of one tenth or less!  If a single figure is to be quoted in the interest of simplicity, it has to be the Net Present Value.  To quote benefits of £61bn without costs is utterly misleading.

While it may still sound a lot, an NPV of £6.1bn is negligible in the context of the UK economy.  It is a benefit over 60 years and it is equivalent to just a fraction of the cost of a cup of coffee for each airport passenger.

Crucially this report was withheld to full cabinet, when the decision to go for Heathrow’s 3rd runway, was voted upon by the full cabinet.

On a local level: Additional Points for Both Consultatations

General observation: The consultation leaflet was not delivered to a significant number of local residents, and the consultation presentations seemed to be an elaborate PR exercise. The DfT website itself sets out benefits but none of the costs to local communities.

Click here for the DfT site which gives more information (scroll down the page to make a submission online or to access addresses for email/letter submissions). 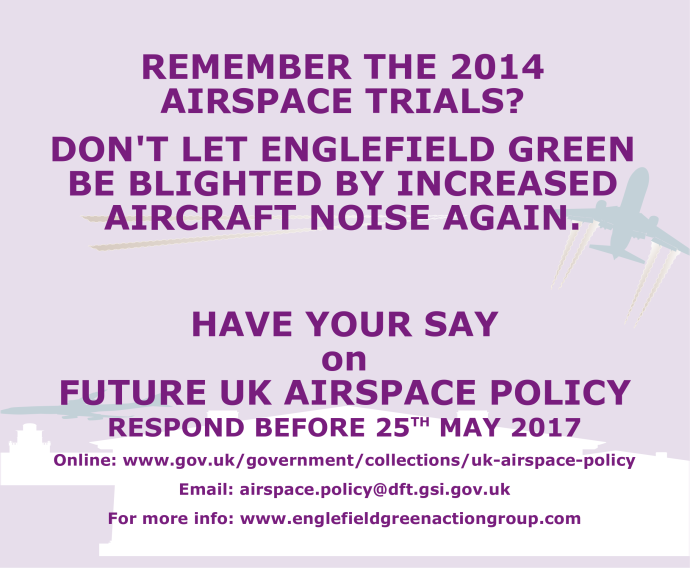 Click here for the DfT site which gives more information (Click here and scroll down the page to make a submission online or to access addresses for email/letter submissions).